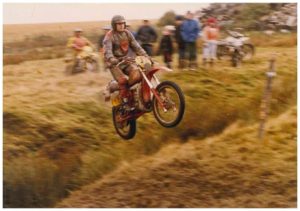 Hafren Dirt Bike Club or HDBC was formed in 1979 by a group of off road motorcycle enthusiasts who used to live in and around the Mid Wales town of Llanidloes. The club was formed in order to try and set up some form of practice facility for the large numbers of riders who were into both motocross and enduro in the area.

Founder members included Caradog Evans, Brian George, Andre Zembruski, Brian Rees, Adrian Jervis, Wyn Hughes and Geraint Jones, the last 3 are still active members to this day almost 30 years on, and most of you will know the last 2 names, they went on to win countless British Enduro championships between them.

Hafren club have always been a club with a large percentage of riding members, and over the years many of them top level riders, probably the reason why many of there events especially in the early days where on the challenging side to say the least.  None more so than the infamous bike swallowing Tarrenig Enduro they used to say the bogs were so soft they wobbled like Jelly, which was first run in about 1981-82.  Although xtreme events seem to be a more modern invention, this was one of the original extreme enduros.  One year blizzard snow conditions made it even worse, the event had 180 starters and only 25 finishers, and rumour has it a few riders ended up in hospital with hypothermia!  Most events back then were difficult, as with other events, the club’s events are less extreme and far more rideable these days.

Over the years the Hafren club used to have there own MX practice facility although this is no longer the case. They have run a few MX events, many smaller H+H and multi lap fun enduros, and the 1st Hafren enduro was run in around 1986/87 and in recent years big trailbike ralies.  After many years thinking do you think we could manage it, the club staged there 1st Hafren British Championship round in 1996, since then they have organised a couple of Inter Centre team enduro’s and further British Championship rounds in 98 (the year Rob Sartin’s bike was washed down to the river in torrential rain), 02,03,& 04.  The club then took the next step and took on the task of organising a very successful European round in 2005, which was aided by some very un Welsh weather, it was more like Spain, dust was more of a problem than mud!  From the success of the Euro round the idea of a World Championship came about, it took almost 12 months to make their minds up and decide whether they thought they were capable and whether they really wanted to take on the massive task of running a World Round, and here we are today!

HDBC is and ACU affiliated club within the Mid Wales Centre, made up of volunteer members who are committed to the continuation of the club and to the promotion and enjoyment of off-road motorcycle sport.

If you are interested please drop us a line and ask to be added to our mailing list, you will then be notified when of club meeting and any other club info, new members are always welcome. We usually meet once a month in the Mount Inn Llanidloes.